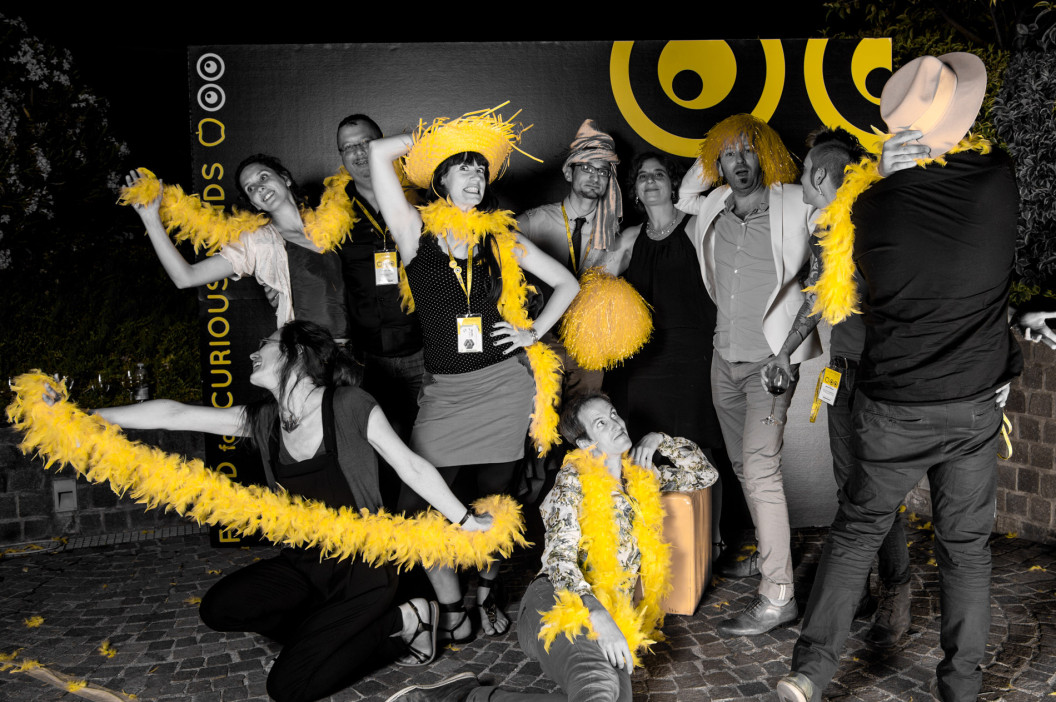 My bucket list is nearly empty. Sloshing around at the bottom was the burning desire drive the exciting roads through and over the Alps made famous by the infamous ex-boys of Top Gear.

So when faced with planning a trip to Paris for the 2015 Euromax conference followed immediately by Ecsite in Trento, Italy (which just happens to be located in Northern Italy, on the southern side of the Alps), the conclusion was obvious – drive there! But after a little web research it was clear there were risks. My perfect vision of my perfect bucket list item would likely be dashed following long lines of tourists, cars towing caravans, trucks and other slow moving non-petrol heads. OK, plan B, take the motorbike. 2,000 miles on a sports bike with the luggage capacity of laptop bag? Mmmm. OK, plan C, buy another bike. There, plan hatched. What has all this to do with technology, attractions and virtual reality? Read on…

Firstly the bike. Probably the most tech-laden piece of transport this side of a Space-X project, especially once I’d finished laden-ing it with the tech I needed to take to Ecsite for the Gamelab I’d been skilfully coerced into supporting. 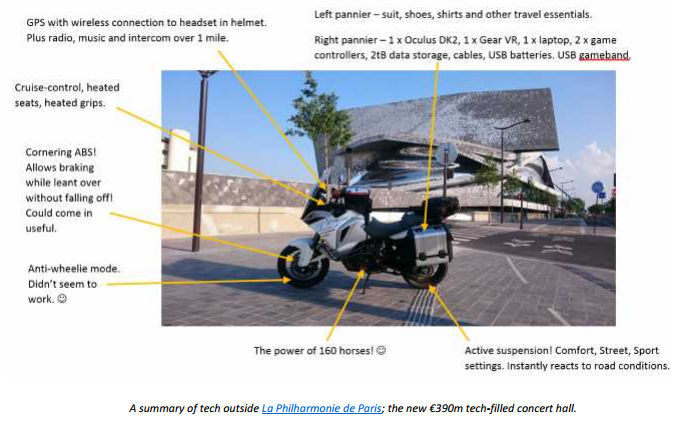 So packed up and fuelled up I set off to the wonderful La-Géode in Paris to attend the 2015 Euromax event. The first significant point to notice was that attendance was up by 50% on last year when I reported that attendance was trailing off. Well done to Laurent Dondey, directeur général of La Géode and his team, as well as Beth Nicholas of Tilted Entertainment, for organising such a cool event in such a cool venue. The uptake in attendance I put partly down to the convergence of domes from three sectors; the giant screen film world (nee IMAX), large planetariums and themed venues. All are seeking new audiences, new content and better technology. I sense the tides are turning, especially in the attraction sector where the immersive facilitation that domes provide are still yet to be fully exploited. Simply put, Domes
are Virtual Reality for everyone to share. Well at least everyone in the same theater. Whereas the virtual reality that is increasingly making its way into daily news pieces, is still a solitary experience. So as VR becomes more popular, so will domes, I posit.

It’s no secret that the ever passionate Laurent, has been, and still is, seeking to find the best technology and suitable content to develop his audiences for the future. A summary of tech outside La Philharmonie de Paris; the new €390m tech-filled concert hall.

One opportunity is to fill his dome with laser light, and the newest kids on the block are also one of the oldest! Cinemeccanica, founded in 1920, showed up with their own laser technology. They’ve developed a plug-in system comprising boxes of lasers which couple together to feed laser light, via fibre-optics, to existing cinema grade DLP (series 2) projectors. This can deliver close to 60,000 lumens, a wider color gamut, very high brightness uniformity across the screen and over 30,000 hours of use.

Cinemeccanica brought along one of their systems coupled to a Barco projector to show on the dome and it certainly demonstrated the higher light output versus the existing ‘dome insert’ digital projector. Unfortunately the side by-side test they showed didn’t quite stand out as I’m sure they would have hoped; a result probably of limited set-up time and therefore less than perfect calibration. A minor missed opportunity perhaps but this is a big market and a long road and I’m sure they’ll be around for another 95 years or more delivering lasers and whatever else comes next. As will others. Laser is here. Dim domes will become a thing of the past. Hoorah!

Just as well because one thing the VR headsets have in abundance is brightness. Just turn the brightness to full on your phone and put it up to your eyes. Bright enough isn’t it? That’s because it has to work outdoors as well. What they still lack however, is resolution. But that’s changing too. For too long we’ve had to play with Oculus’s development units, low resolution prototypes let loose into the market as, well development units. This was a wise move because clearly they’re not up to the job. But despite that, what really A M A Z E S me is the universal wow reaction when people don the headset and for the first time look down or look behind them. This extended field of view is a revelation to generations brought up on a field of view that can be obscured by a magazine held at arm’s length. Tightly packed onto my tech-tourer was Oculus’s DK2 unit and Samsung’s Gear VR; a very nearly consumer ready version that simply clips their high spec smartphone to a plastic headset with lenses that couple the screen to your eyes. It’s really rather good. As you can see below, Mark Katz of National Geographic is experiencing VR for the first time. But not with my headset, this one belonged to Robin Sip of Mirage 3D (on the left). Looks like we’ll all be carrying them around soon! 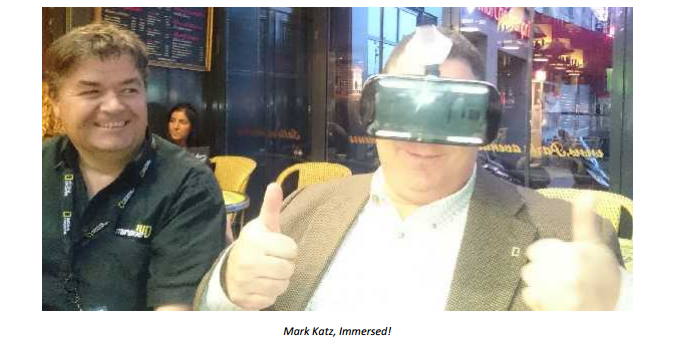 So au-revoir Paris and hallo Schweiz; my stop off in the Alps was the quaint little village of Wassen in Switzerland, nestled among the best driving, and riding, roads in the world. Tomorrow was going to be a good day.

And oh-my. While I have enjoyed many a virtual reality and immersive experience in domes and wearing headsets, there is nothing quite like living it. And feeling it. The cool air, the wind and the OMG-that-was-close moment of realising that the mind can really only focus on one task at a time. Taking in the stunning view, which changes around every corner, versus making sure that you make it around every corner for the next view. One task or the other. Not both. I calculate that I negotiated over 1,000 corners that day, hundreds of which were WOW moments. 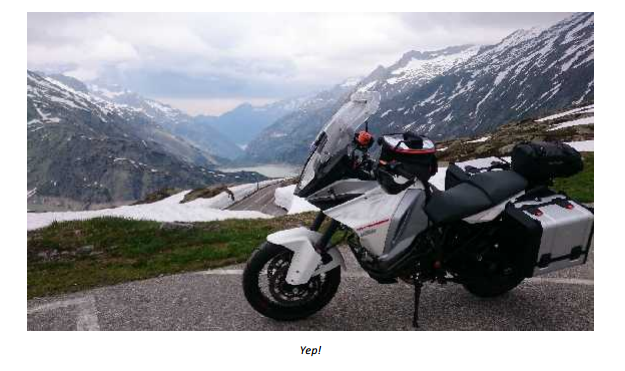 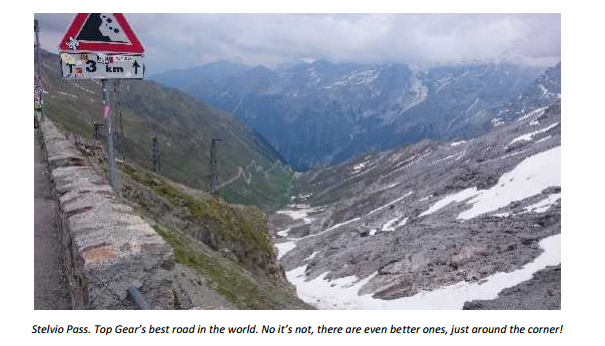 I’ve never been so wowed. And the thing that made it the most compelling was that I was controlling, most of the time (!), the speed of events and the intensity of the wow. Faster, faster, run out of breath, slow down take and in the breath-taking view. All day long. You can probably tell I had a good time. Bucket list done.

So, next stop Ecsite at Muse in Trento 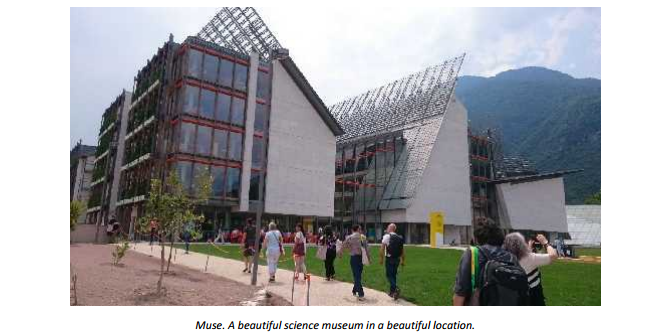 And I wish, like last year, I could report on the conference and the sessions. But due to the sheer popularity of the VR tech that I’d brought along, I was tethered to the GameLab, busy servicing the lines of people eager to experience VR for the first time!

Firstly a little about the Gamelab. This was a hands-on space to experience examples of games developed, or being developed for science centers. Malvina Artheau, head of the digital department at Science Animation Midi-Pyrénées in Toulouse did a super job of wrangling a disparate and very enthusiastic group of volunteers to bring along their wares including Carrefour Numérique and Universience Paris, the Science Museum London, Le Casemate Grenoble and HKD based in Margate. There was a wide range of activities to engage with, both digital and physical, exploring such topics as how can a board game be used to talk about evolution? Is a card game a good way to understand how html language works? Is the LivingLab approach easier to engage with once having used a multi-touch video game explaining it? And even exploring how to co-create games with visitors and Students? 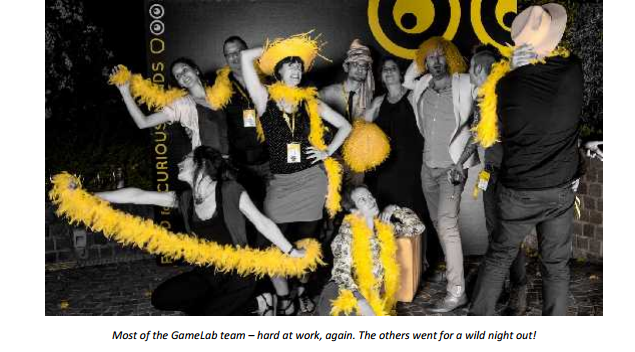 But by far the most popular were the two VR headsets. We ended up taking it in turns to manage the participants, then eventually the participants managed it themselves, handing the headsets to the next in line and showing them how to operate it and recommending what to watch. 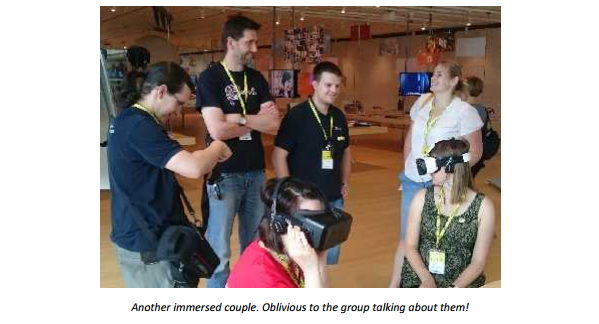 And without exception, “wow”. Everyone. Within 10 to 15 seconds. I could have charged. I should have charged (it would have covered the eye-watering speeding fine in Switzerland). I was particularly surprised by how long people wanted to be immersed. 5 minutes, 10, 15, more! Yes, even knowing there was a queue of people waiting, many would stay immersed in their own world completely oblivious to the world around them and moving from one experience to the next. This isolation is the Achilles heel of VR headsets.

This VR thing is going to catch on though. There’s a lot of headroom in terms of developing the technology and the content, and there are a lot of big players putting big money into it.

I suspect though that once the experience of being immersed in the headset, with its 360 x 360 field of view, has made it into the mainstream, then that element of the experience will wane. From then on content will need to amaze all by itself. But what this conference showed me was just how few people have experienced immersion like this, and how intense and how positive the reaction was, by everyone. This points strongly to a very immersive future of isolated experiences like these headsets and group experiences such as domes and other very immersive theaters. Which is good news, all around (pun very definitely intended.)

Next we need to develop a way of recreating that motorcycle ride through the Alps, with all its thrills, sensations and the real sense of danger. Ideally without the real danger. That will take a while. In the meantime just visit www.ktm.com and go and make your own thrills! 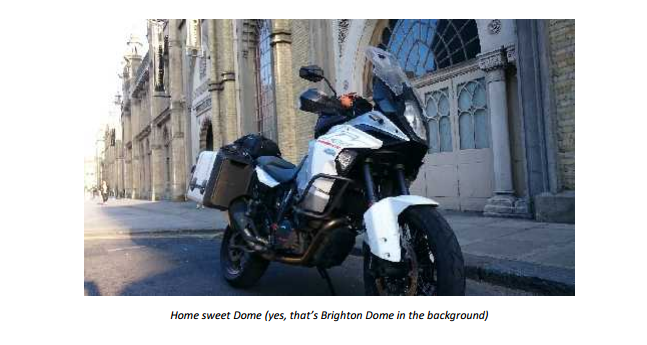